This is a chain of peaks. Tirich Mir (Main) is the highest peak in whole of the Hindukush range. The traditional route to the peak passes through Chitral – Reshun and Khosht. There is also a shorter route to the peak. After a two-hour jeep drive on Chitral-Mastuj road one has to take a direct route from Perpish to Barum village and then through the glacier of the same name (Barum) to the peak. This route is, however, recommended for those who have already acclimatized themselves with high-altitude-climbing; otherwise there is a great danger of high altitude sickness.

Tirich Mir West II (7,500meters) was climbed in 1974 by Beppe Re and Guido Machetto of an Italian expedition. The party also climbed an already-climbed Dirgol Zom peak. Tirich Mir West I (7,487meters) was climbed in 1967 by a Czechoslovak expedition led by Vladimir Smida. The party is stated to have climbed it by the north-west col. J. Cervinka, I. Galfy, V. Smida and I. Urbanovic reached the top. 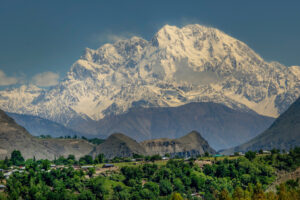 Chogholingsa Treks & Tours Pakistan which established in March 2015 has grown and developed become one of the reliable travel companies in Pakistan. After nearly 8 years we stand and open affiliated offices in different cities of Pakistan specially in Gilgit Baltistan to assist and facilitate in providing services to our local and foreign customers.
Chogholingsa Trek & Tours Pakistan (CTTP) has become a company that is trusted to handle adventurer, cultural, jeep safaries, hunting, business and other incentive activities which is backed up by professional staff, as well as for family leisure trips. We are ready to serve our customers travel needs both inbound and outbound tours……  more