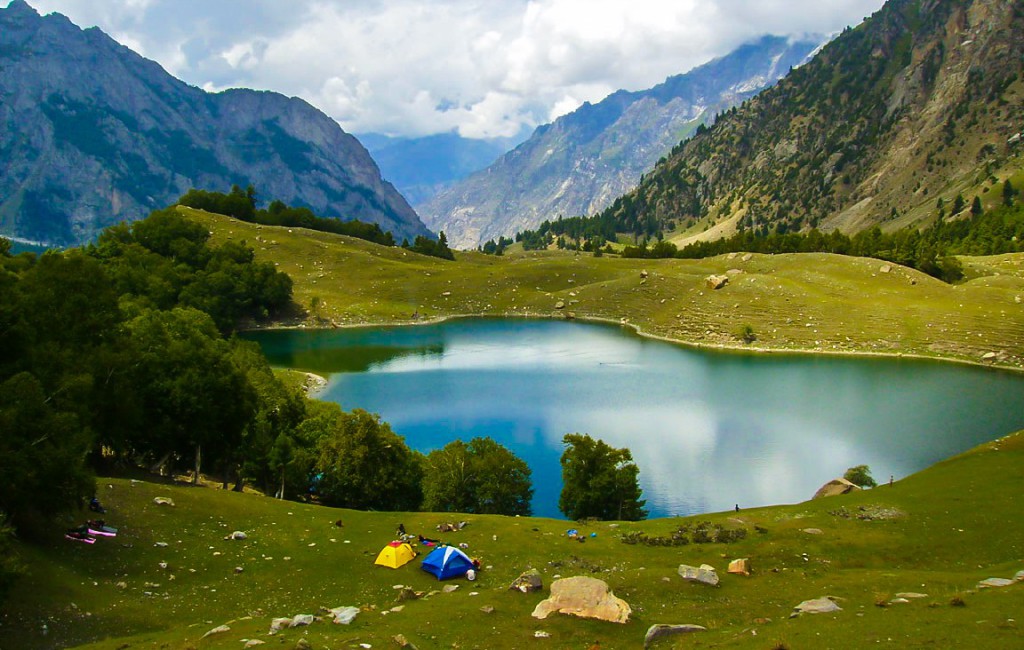 Haramosh La (4800m) is a glaciated pass linking the Chogo Lungma and Haramosh glaciers on its north-east side with the Haramosh Valley to its west (see the Chogo Lungma Glacier map, p307). The pass is enclosed by Laila (6986m), which towers over the confluence of these glaciers, Mani (6685m) and Haramosh (7409m). This extreme nine-day technical trek, which is possible late to July to early September, crosses one of the Karakoram’s most formidable and

infrequently done passes. Snow and avalanche danger are present on both side of the pass early in the season with rock fall becoming more of a danger by mid-Summer. This trek is only suited to experienced trekkers with mountaineering experience. The Haramosh La is usually crossed from east to west.

From Doko in the Basha Valley, the route follows the Chogo Lungma Glacier (see p) for the first 3½ days as far as Bolocho. From Bolocho, the route crosses the Chogo Lungma Glacier, heads south and west up the heavily crevassed Haramosh Glacier, and reaches a grassy ablation valley along the glacier’s north margin and Laila Base Camp (4100m) on Day 5.

On Day 6, rope up to reach Sharing, the level glacial basin at the base of the pass, five to six hours from Laila Base Camp. On Day 7, travel in roped teams about four hours to the pass, probing carefully for frequent crevasses. Keep to the glacier’s west side where it’s less steep and fix a rope at the steepest section near the top. Camp on top of the level, open Haramosh La. Stronger parties may prefer to combine Days 6 and 7 by leaving Laila Base Camp before dawn to ascend Haramosh La the same day, reaching the top by mid-morning.

Depending on snow conditions, you may need to fix as much as 500m of rope to descend the steep, scary snow slope on the west side of the pass on Day 8. Beware of avalanche and rock-fall danger as you descend steep scree lower down. Mani, at the bottom, is a possible camp site, but a little farther is the inviting Kutwal Lake (3260m), seven to eight hours from the pass.

Continue downvalley on a good trail on Day 9 to Dassu with views of high peaks all around. When you prearrange a vehicle, it can meet you at the roadhead in Dassu. Otherwise, walk on the road along the Phuparash River to Sassi on the Gilgit-Skardu road to catch a ride on a passing vehicle.

To attempt to cross the Haramosh La without a qualified companion who knows the route and its danger is foolhardy. Conflict between Arandu’s Balti people and Haramosh’s Shina-speakers, however, reportedly prevents Arandu porters from crossing the pass, so be sure to hire a competent Shina speaker. Local porters know the route, but don’t know where or how to fix ropes, judge avalanche or rock-fall danger, or make crevasse rescues if necessary. Wearing a climbing helmet is prudent.