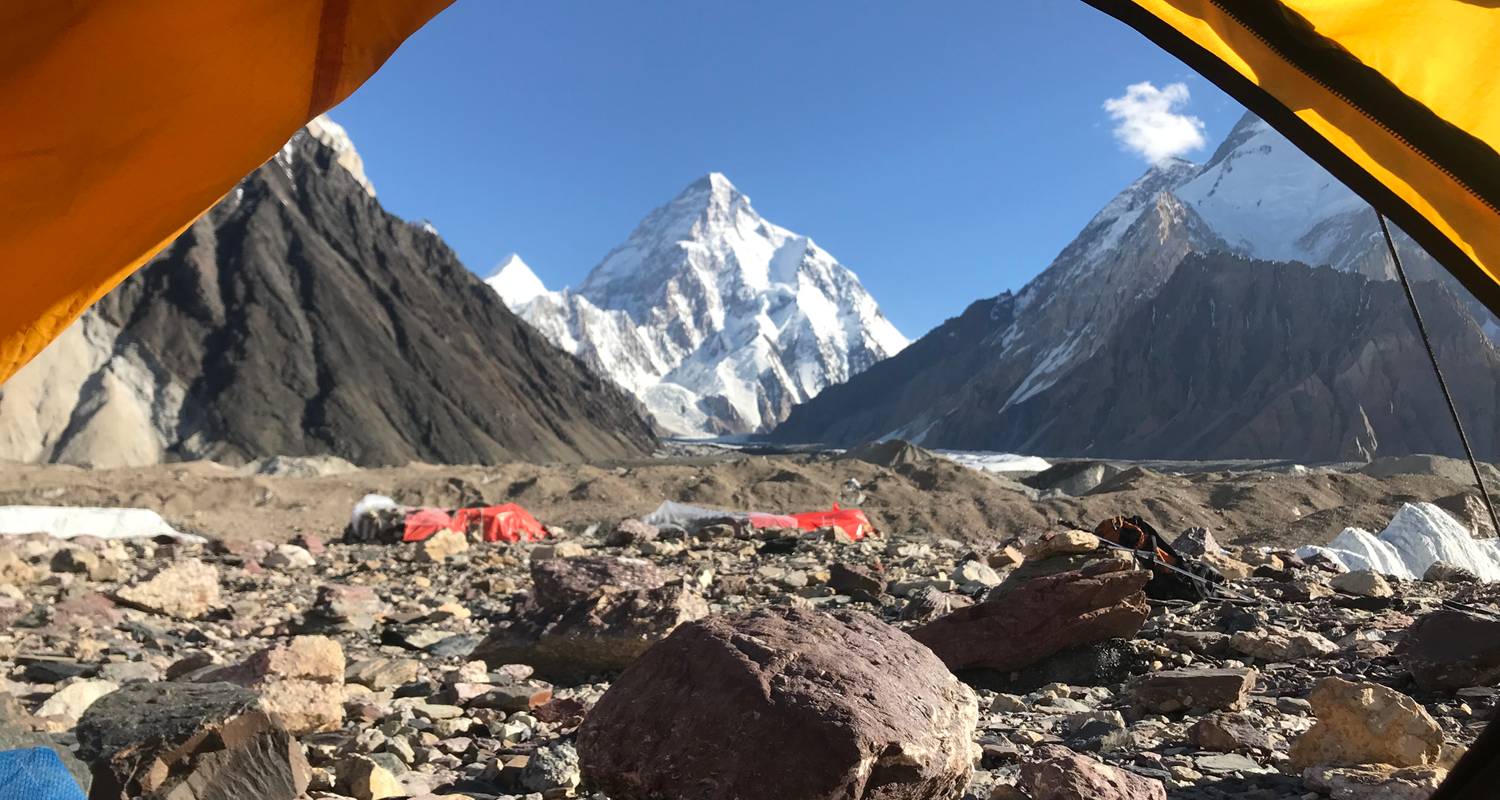 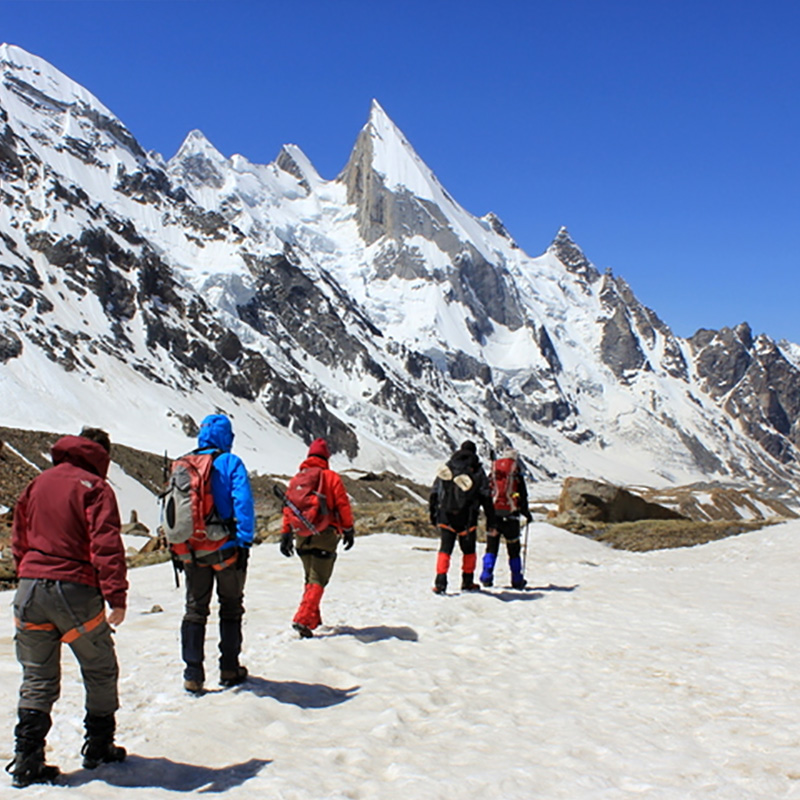 Spend four days at Concordia, home to arguably the most spectacular mountain scenery on earth and the perfect base for forays into the surrounding range reach K2 Base Camp, the foot of the second highest mountain in the world

This trek ranked among the top ten classic hikes in the world Concordia K-2 Base Camp Trek is a lifetime experience. The trek leads towards Concordia surrounded by a number of 8000 & 7000 M high peaks including K-2 (the king of mountains), Broad Peak, Gasherbrum IV, Baltoro Kangri, & Chogolisa etc. En-route glimpses of some other famous high mountains; Trango Tower, Masherbrum Peak, and Muztagh Tower besides many tributary glaciers of Baltoro, will mesmerize you in the wilderness. Many adventure enthusiasts believed that the beauty of the Karakoram Mountains is unique and beyond description. Starting from Islamabad; we head towards Skardu, the entry point of the mighty Karakorams. Driving by jeeps to Askole, a remote and last dwelling will be our first camping day. Jhula and Paiju will be next campsites. Paiju, green oasis under the shadows of Paiju Peak, here we have the first views of the immense Baltoro Glacier. Urdukas an impressive campsite with a panoramic view over the Baltoro and to the dramatic rock spires on the opposite side of the glacier. Goro II, at about 4300m, is on the glacier where ledges have been leveled out for the tents; there are views of Muztagh (7,270m), Masherbrum (7,800m) and Gasherbrum IV. We head to Concordia “the throne room of the mountain gods” as described by Galen Rowell, a famous climber and writer. Finally, we arrive at Concordia, the junction of Baltoro and Godwin Austin Glaciers with several other tributaries, serving as the base for the giants of Karakorams. Gondogoro La 5450m is the most popular and frequently used high pass in the Karakoram. This route was established in 1986 that connects Concordia and the upper Baltoro Glacier to the beautiful Hushe Valley over the Gondogoro La. Though quite challenging and technical pass but provides an alternate route to return from Concordia hence making equally famous among trekkers and climbers. If weather favors, the high pass offers the most overwhelming and extraordinary view of K-2, Broad Peak, G-I, G-II, G-III, G-IV, Masherbrum, & Chogolisa besides many other peaks and glaciers in the region.

JUNE -01: Arrive Islamabad-On arrival Chogholingsa Treks & Tours guide will pick you from Islamabad international air port  and transfer you to hotel. Afternoon a sight-seeing trip will take you to the twin cities of modern capital Islamabad and the old city Rawalpindi. Overnight will be in hotel.

JUNE- 02: Flight to Skardu-Early hours transfer to airport for flight to Skardu, which is very spectacular mountain flight but very dependent on weather conditions. Alternately, we take two day drive to Skardu, along the Karakorum Highway. We stay overnight at Chilas, over heading by the Nanga Parbat, the second highest peak in Pakistan .

JUNE-03: Skardu (275km)-In case the flight operate than we have a free day for acclimatization and preparations at Skardu, the capital of
Baltistan and the gateway to great Karakorum mountains. If we are driving the road journey today will be 7-8 hrs to Skardu (275km) along the Indus River.
On route are spectacular views of Nanga Parbat (8125m), Haramosh peaks etc afternoon the group will attend a briefing session at the Ministry of Tourism Meals and overnight hotel.

JUNE-04: Drive to Askoli (3000m)-Having an early breakfast we start our jeep journey(7-8 hrs) along the Shigar and Braldu valleys to Askoli village (3050m), the last permanent settlement of Shigar Valley. This seven hours hard drive is an extremely spectacular and fascinating journey through little changed traditional villages and orchards. Overnight in tents.

JUNE-05: Trek to Jhola(3200m)-After an early breakfast and distribution of luggage among porters, we start the trek (6 hrs) and walk along the turbulent waters of the Braldu River towards Jhola(3200m). Most of the trek is an easy walk on established trails except the rocky snout of the Biafo Glacier which we cross and continue to up to Jhola camp site situated just after the confluence of the Braldu and Dumordo Rivers. Meals and overnight in tents.

JUNE-06: Trek to Paiju (3450m)-We leave Jhola early for Paiju (3450m). Most of the way is easy mainly at riverside of Braldu River. 7 – 8 hours walking in a hot and dry conditions and crossing many side streams we will reach Paiju afternoon. The Masherbrum group on our right side and whilst ahead of us we gradually begin to see the spires and towers of Trango and Cathedral groups. Today we will also see the snout of the Baltoro Glacier. Picnic lunch will be provided. Dinner and overnight in tents.

JUNE-0 7: Paiju (3450m)- A relaxation, acclimatization and preparations day at Paiju. Meals and overnight in tents.

JUNE-08: Trek to Urdukas (4,200)- Today we will cross the Baltoro Glacier which is hard but rewarding with the fascinating views of Paiju Peak, Trango Towers, Lobsang Spires, Grand Cathedral, Uli Biafo and many other needle like rock peaks. We cross the glacier to the southern side and continue along an ablation valley to our campsite at Urdukas. Meals and overnight in tents.

JUNE-09: Trek to Goro (4,300m)- Trek to Goro from Urdukas is easy due to the bare glacier. There are breathtaking views all around us. Heading ahead there are Broad Peak (8047m) and Gasherbrum IV (7925m) on the right side the Mashabrum Group and the left the Trango group of peaks situated. 4-5 hours trekking and overnight in tents.

JUNE-10: Trek to Concordia (4650m)- After three to four hour trek, today, we will reach Concordia, the Throne Room of the Mountain Gods. All around us guarding by the world’s highest peaks including the K2 (8611m) the second highest mountain in the world, Gasherbrum I (8068m), Broad Peak(8047m), Gasherbrum II (8035m) and Chogolisa (7653m). We will camp at the confluence of the Baltoro and Godwin Austin Glacier.

JUNE-11: Rest/Exploration Day A free day at Concordia can be use to trek up to K-2 BC or Gasherbrum base camp or just make a rest day at camp site.

JUNE-12 Ali Camp (5030m) We leave Concordia and traverse towards Gondogoro La. The portion is difficult with crevasses. Once on the Vigne Glacier it is a comparatively easy and gradual walk over snow and ice up to the camp. We will sleep early to wake up very early tomorrow.

JUNE-13: Over Gondogoro La (5650m) We leave Ali Camp at midnight to climb the Gondogoro La with crisp snow. In the first hours we will walk on the lateral moraines to avoid the crevasses and with near to the pass walk on snow up to the pass using fixed ropes as well as crampons and ice axes. With sun rising we will be at the top of the pass. 5650m high Gondogoro La offers breathtaking mountain panorama including K-2, Broad Peak, Gasherbrums, Mashabrum and many more. After 8 to 9 hours we will reach at Khuispang,  a grassy spot embellished with the views of Laila Peak (6063m)

JUNE-15:  Dalsangpa (4150m) Three to four hours descend  onto the Gondogoro Glacier and lovely stroll through wild flowers, with striking views of Yermandu Kangri (7555m), Mashabrum (7821m), and the glaciers flowing down. Campsite is pleasant with wildflowers and streams.

JUNE-16: Trek to Saischo (3350m) Easy four hours walking on the fixed trails through the summer pastures we will reach  Saischo, the meeting point of Saraksa and Gondogoro valleys. The night here always be celebrated by multicultural peoples gathered here for the night.

JUNE-18: Drive to Skardu 5-6 hours jeep ride will take us to Skardu along the Shyok and Indus Rivers. Afternoon de-breifing at Ministry of Tourism, Skardu. Meals and overnight at hotel.

JUNE- 20:     Islamabad Free day in Islamabad or drive to Islamabad from Chilas for 12 hours.

NOTE:- Itinerary for July and August will be same except the month.